Do any of these signs indicate the actual street name? Nope.  Welcome to French driving.

Sierra and I slept in until 11:30am the next day.  This was mainly due to the powerful blinds that kept our bedroom a dark cocoon.  Jeff and Tenzin were already awake, which was a role reversal.  They tend to be the night owls, whereas Sierra and I tend to bound out of bed every morning.

Using his limited French, Jeff managed to purchase a baguette and a croissant at the local bakery.  It was delicious to bite into freshly baked bread first thing in the morning.  I didn’t even miss my morning smoothie.

Since Jeff had been awake since 4am, he needed to nap.  Thus, I marched out of the house with the girls on a mission.  Since I had been hesitant to drive in France, we walked down to the bus stop a block away.  As we waited at the bus stop, I noticed that no buses were going to our destination.  One of the hardest things about traveling is making decisions on the spot.  It is even harder with children in tow.  Thankfully, neither of them were squirmy.  They just waited patiently and I told them that we would have to go back to get the car so that I could drive to our destination.

“What?” asked Sierra. “Will you be okay?”  She already knew about my reluctance to drive.
“Of course, we’ll be okay,” I reassured Sierra.  I was also trying to reassure myself.

Even though I read French, the street signs here elude me.  There are about 5 signs at each intersection indicating all sorts of useful information.  Unfortunately, I usually cannot spot the actual street name.

When we got to the car, I instructed both girls to look out for the big street I needed to turn onto, Rue Jean Moulin.  When we got to the street I believed was the one to turn onto, there were no indications I could decipher.  My instincts told me to turn, so I did.  “I think this is the wrong street,” I told the girls.  A few seconds later, I spotted it: Monoprix, our first destination.  “Yay!  We did it!” I shouted.  A miracle 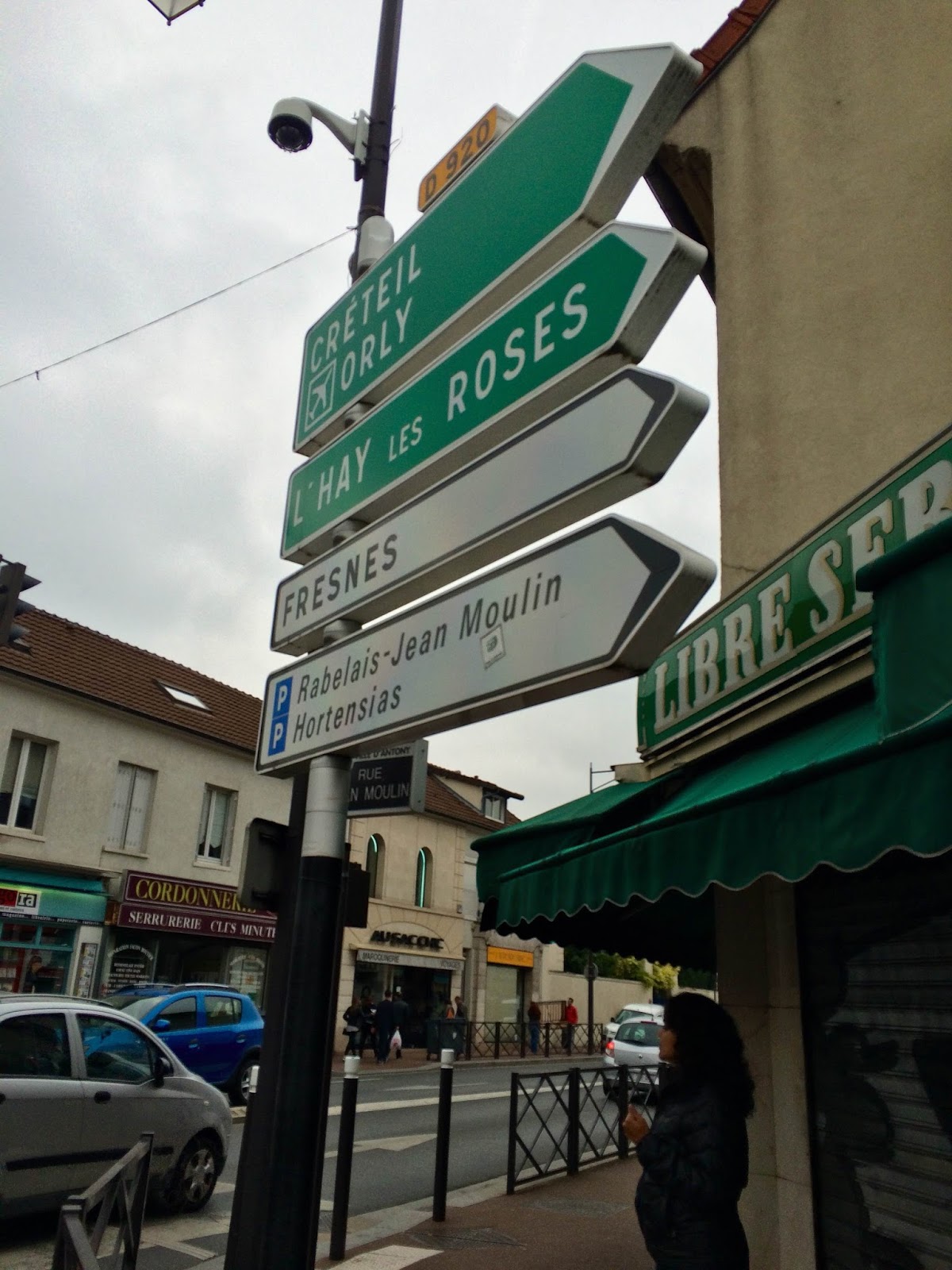 Can you guess where the street sign is located? It’s not the green or white signs. If you count from the top, 1-Green, 2-Green, 3-White, 4-White, and then finally right under that last white sign is a tiny dark sign that says “Rue Jean Moulin.”  It’s not even visible from the street!  I took this picture on a walk later with my friend Ritu so that I could actually see if the street sign existed.

My girls and I went to Monoprix to take photos for our monthly metro passes.  Since the girls and I are staying in France for an entire month, it was more economical to purchase a Navigo card.  The actual physical card costs 5 Euros.  Then, it is 70 Euros for a monthly pass.  There was no discount for the girls, unfortunately.

Have you ever taken an official photo in France?  Here are the instructions:
1) Don’t smile
2) Keep a neutral expression
3) Keep your lips closed
4) Don’t wear a hat
5) Show your ears
6) Don’t tilt your head
7) Make sure your hair is not messy (well, this last one is my guess as to what the instructions were saying)

This is how our photos turned out: 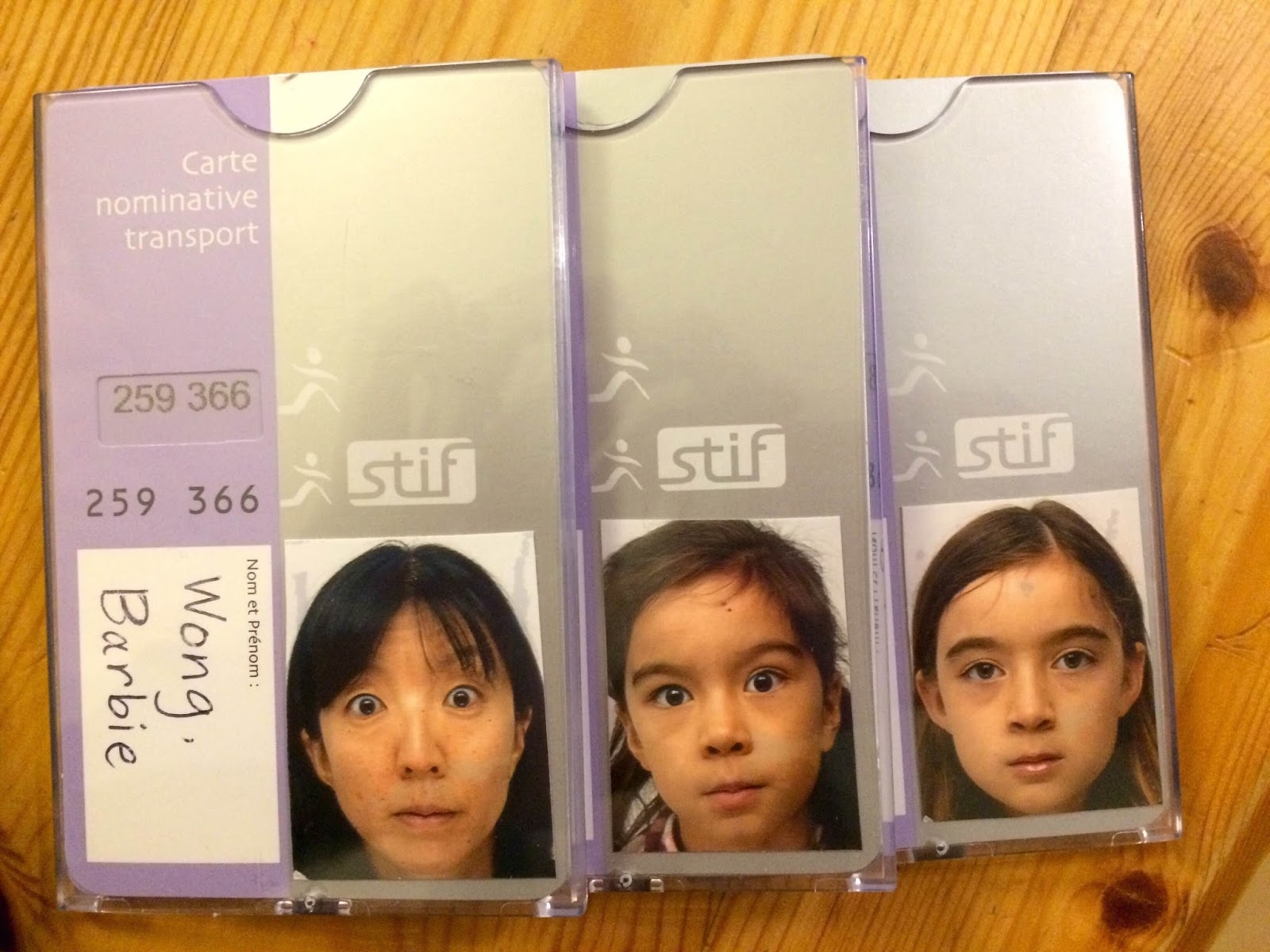 Scary or what? All I could think about was “don’t blink, don’t smile, keep your lips closed.”  We’re not winning any beauty pageants with those photos.  I think Tenzin looks the toughest. 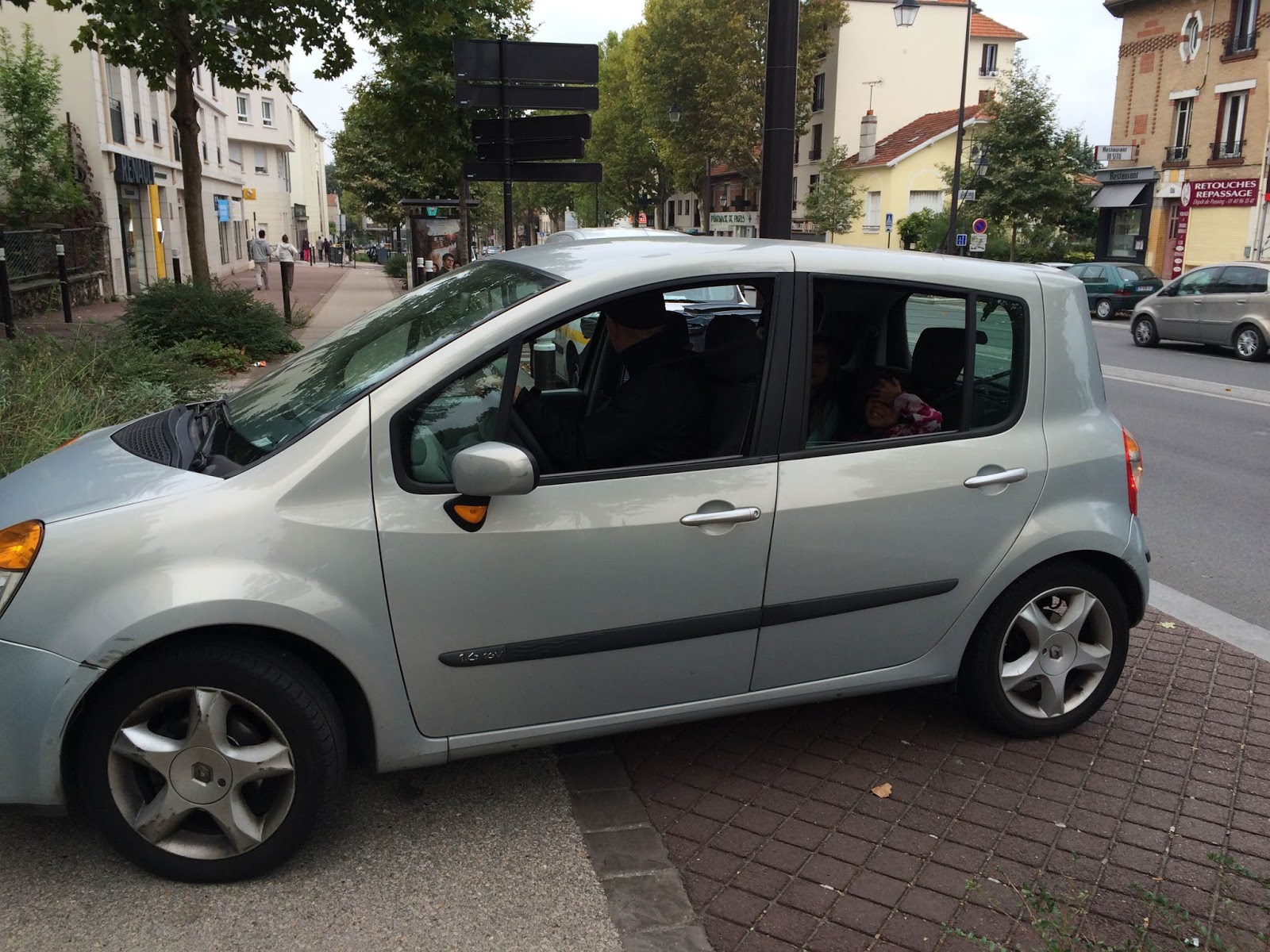 This is the cute little Renault we are driving.  We swapped cars as well as houses with the French family, so we can go anywhere we want.  Of course, gas prices are more expensive.  Don’t worry, France, I’m not driving into Paris.  We are in a cute little suburb called Antony where cars are just a bit slower, and that is just my pace. France, travel